REVIEW ON 5 STEPS TO ACHIEVE SUCCESS WITH BRYAN STEEL

This week on Aimed 2 Purpose, we are talking with the British cyclist, Bryan Steel, and how he was able to achieve so much success with life goals, using only 5 steps!

Missed this week's live show or want to re-listen to the show again? Want to listen to our previous guests? You still can! By clicking on this link: gvbstudios.com/show/a2p

Bryan Steel is an Olympic medalists for the British cycling team. He was able to go to the Olympics with his cycling team at age 21 even though he was not a athlete when he was younger nor a school person too. The only reason why he joined cycling was because of his brother, but he fell in love with it and was able to cycle for the World Championships for 3 years before heading to the Olympics, not once or twice, but four times!

He went to the 1992 Olympic Games in Barcelona, the 1996 Olympic Games in Atlanta, 2000 Olympics in Sydney (bronze medal) and 2004 Olympics in Athens (silver medal). His took his British Cycling team, world rank was number 17, to becoming the number 1 rank worldwide in just 8 years!

He was able to achieve his success due to his team and hard work using only 5 steps!

Step 1: Set out your vision and develop a phased plan

Create a vision for the future, and start developing a plan to achieve it. Bryan Steel and his team set out a vision in between their first and second Olympic to grow from ranking #17 to getting a bronze medal in their next Olympic. They then created a plan to achieve their goal, talking and agreeing as a group to work together, harder.

A team is four people in a cycling team. They were able to break it down separately, understanding that they each of them have a different job. They have to get them up to speed, have to hold the speed, and put more speed in. With four people, they were able to divide the roles between the four people, making sure that the team understood and know the roles that was given to them and must be done.

First by making a pitch/talk about their role and what they are good at for 30 seconds. Then they will figure out what are the 10 good qualities for each position (Man 1, Man 2, Man 3 and Man 4). Then they will reassess themselves and it will help them figure out who is good for which role. For Bryan Steel, it was Man 3. They have to also test it out to see if their position is right for them, even though it may not be something they thought they were good at.

He makes a good pitch in saying that sometimes people who says that are good at something, will most likely not be true. We can all agree that it is something that we truly do, but then it just means we should start taking a bigger responsibility and knowing ourselves a lot better!

Sometimes things just doesn't work. When that happens, they have to understand the reason why and then figure out how. Then they start all over from the top again, and work and see what the small changes they have to do. They question everything and that will help them understand why and try out new things in order to develop their knowledge and maybe will achieve their small goals. Like the saying goes, "At first if you don't succeed, then try again"

This shows that what might works today, may not work tomorrow. And that nothing is ever set, everything always changes. So we must always work hard each day in order to achieve our small goals for each days!

This is pretty self-explanatory. We all most make time to review our work, in the past. Then we make a new goal for the new year or month, and while making a goal, we must also make a new plan in order to achieve it! If you want to lose weight by a certain month, then set a plan for each week and try to keep to the plan. If you're halfway through the plan and realizes it does not work, then go back to the plan and make small changes that might improve the work. Of course, the goal must be set in possible and healthy terms!

Bryan Steel's five steps are very inspirational and motivational with his strong vision of success! With his steps, everyone will be able to achieve their goals over and over again and understand themselves even better! Thank you Bryan for your wisdom in achieving success! Go to his website at www.bryansteel.com or his twitter @bryan_steel or facebook at Bryan Steel

Come back next week to hear another special guest talk to Louisa Hicks and Kennon Mason! Want to catch the live show? It happens every Monday, on gvbstudios.com/show/a2p at 5 pm PST! Follow us on twitter at @aimed2purpose for a live tweet, facebook and instagram at aimed2purpose!
Posted by O at 3:50 PM 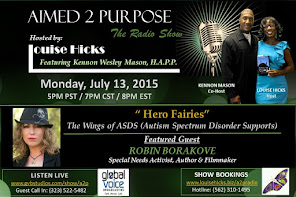